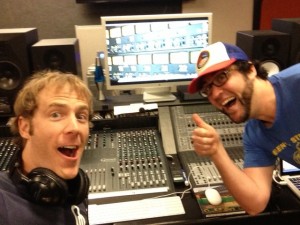 Just a quick update here. It you didn’t check any of my social net works the last 4 weeks. The big news with me is I’m finally done recording my full length record named “Escapism”. It has been a long time in the making, but through a lot of luck, patience, and a lot of help from some great people, namely Jeff Livingston, Ron Marschall and Ray Barbee the recording part is done. Mixing is set for next month, then it has to be mastered. So its not available YET, but a lot of it is done. And will be ready this summer, no release date yet, but soon!
It was a wild ride during the 2 weeks of recording, I couldn’t be happier how everyday went, Some days were harder than others, but I had waited so long for this and it felt so great to finally be getting it done. I met a hand full of real musicians through this process and made a few friends along the way that seriously inspired me. And turns out they ended up playing on the record, like Ron Marschall (I could freak out still over him playing in Christie Front Drive, but I’m really trying to hold it together) and Jeff Livingston. Jeff did so much; Producer role, song arranger, co-writer, and played piano, bass, tambourine, he did a lot. And Ray Barbee. Ray completely killed it on this record and his playing is unreal. It is an honor to have him on Escapism. Matt Wiser played pedal steel guitar on some tracks as well. So cool to see him add to this record. This entire thing has left me speechless honestly, its only been a week since we wrapped it all up and I’m still digesting all that happened. I can’t thank the guys I mentioned enough for there efforts and patience and the fact that they cared to be part of this.

Can’t wait to share it with all of you when Escapism is ready on iTunes. Stay tuned for some other stuff before its out. Thanks!