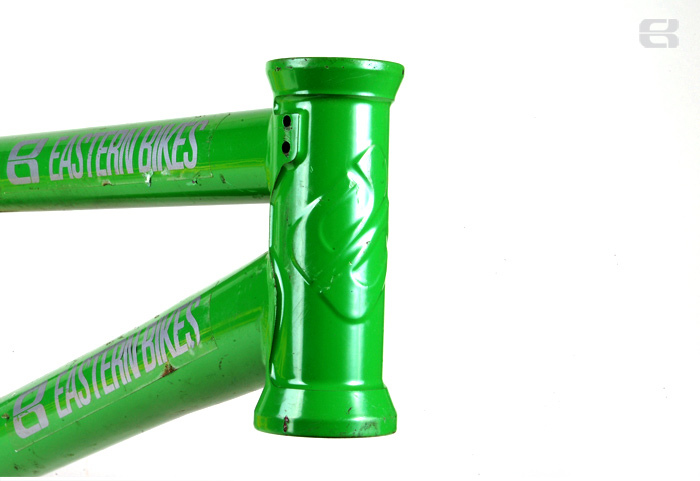 One of the cool things about working at Eastern is getting to see and sometimes ride the prototype products that come through the door. One of them was this frame, that some of the employees called, The Tiny Time frame. This was made right before we came out with the Journey frame. It had a lot of cool and innovative features on it that we all loved, but unfortunately we too expensive to produce. I ran the frame that you see here for almost a year without any problems.   -Leigh.

This is the frame I rode for a year. We had half-a-dozen made in different sizes. This one was a 20″ toptube. Felt easy to whip around.

Around this time everyone was slammping there seat so you didn’t need much post. The seattube reminds me of a pirartes wooden leg.

This frame still had the integrated seatpost clamp under the seatstay.

This was most everyone’s favorite feature on the frame. The embossed headtube ended up being too expensive but damn, it looked good!

The crimped chainstays allowed for a wider tire on the rear.

This is one of those things that we tried but found it wasn’t the best way. The chain tensioners worked but it was hard to get an allen wrench
in to tighten it. We eventually switched to the tensioner going through the dropout.

This sticker wasn’t part of the frame but it was another sample we received the same time and I slapped it on the frame. It was a puffy, clear
sticker that we like but couldn’t get it at an affordable price so decided not to do them.